Paige’s cinnamon-brown curls, soft brown eyes, and slender body bursting with chaotic energy had captured Sam’s interest from the get-go. She radiated a weird mix of joy and orneriness. A combination that suited him to a tee, and he had no intention of letting Paige be the one who got away.

Recognizing this proved that he’d gotten a lot smarter since the last time he’d taken a chance at love. Ready to settle down, he’d overlooked all the reasons why Iris hadn’t been the right woman to spend the rest of his life with. His fault for confusing fun with forever. Timing being everything, she’d dumped him before he’d proposed, sparing him that humiliation. Since a patrolman with aspirations of rising to the rank of detective couldn’t compare to an FBI candidate, it was wham, bam, goodbye, Sam.

Despite what had happened with Iris, applying for the job of sheriff on Providence Island had been less about his ego and hurt feelings and more about his career. Something about PI had called to him from the moment he’d stepped off the ferry. This was a place where he could make a difference. With PI attracting more tourists all the time, his job had grown, and sometimes it was a challenge keeping both the residents and the visitors happy and safe.

When word had come from his former partner that Iris’s marriage hadn’t lasted long after Jeff’s first FBI field assignment wasn’t to sunny LA or glitzy New York, but rather to the flatlands of Omaha, Sam had shrugged and filed that under old news.

Paige Carson, on the other hand, was the real forever-after girl he’d been waiting for. The sparks simmering between them gave Sam good reason to believe he could win her heart. The question remaining was if Paige was willing to take that risk now that she had a child to consider. As for himself, he had no objection to a ready-made family and couldn’t wait to meet the little miss who had everyone rallying to protect her.

A glance to the side showed Paige’s lips moving, and her fingers were busy, apparently ticking off a to-do list. Guess it was up to him to get the conversational ball rolling.

“What’s the plan after we pick up the rack?”

She jumped at the break in the silence. “Huh? Oh, don’t worry about the rack. If you don’t mind helping me move the boxes from your truck to my Jeep—”

“Why don’t I drop you off at your Jeep, then we’ll meet back at your house and unload from there?”

“That makes sense. Did you notice if there’s a car seat? Did Mr. Warden get one from EVL’s car?”

She plucked at the hem of her sweater. “I don’t even have a room fixed for Jess. I mean, I have a room for her, but she needs her own special space.”

“From my limited but memorable exposure to her grandmother, I’d say Jess will be happy with whatever you have for now. Let the kid pick out what she likes.”

“She’d love that.” Paige heaved a deep sigh. “It’ll have to wait until next weekend. I have to meet with the attorney tomorrow for the sale to Mr. Warden and deal with the guardian petition.”

“Close the restaurant for the day.”

“I can’t afford to lose that much revenue. Monday’s one of our busiest days.”

“What about your staff?”

“Karen and Rick can handle the kitchen, and I need Megan for deliveries. I could ask Megan to take over the counter as soon as she finishes the deliveries. Until that time, I’ll have to cover the front, and I can’t expect Jess to sit at a table all day.”

Sam grinned. “I know just the person who can help, and it won’t cost you a dime.”

“Let me check and confirm, but I promise you someone reliable will be on hand.” Especially when he explained the pros and cons of accepting that offer to the candidate he had in mind.

“I won’t let you down.” He paused, giving her a moment more to protest. “Trust me?”

For the first time since they’d left Dana’s house, Paige smiled. “Yeah, I do. I’m nervous about not being at the restaurant, but Jess comes first.”

Sam parked in the lot in front of the old diner and turned off the ignition. “Let’s go inside.”

She stared at him. “There’s nothing to see.”

“I’d like to take a walk through your history.” His gaze flickered from Paige to the diner, then back. “Or we can head on to your house.”

Her casual shrug didn’t fool him one bit. “Sure, we can take a look.”

Sam waited as Paige unlocked the front door, then he held it open for her to enter. Hands on hips, he looked around the restaurant.

“It doesn’t look like much right now,” Paige said.

“Looks exactly like what it was.” He strolled over to the counter and seated himself on the stool. “A place to get a good meal.”

The wink he sent in her direction sent Paige scurrying to the opposite side of the counter. A playful smile danced across her face.

“Welcome to Carson’s. Can I start you out with a cup of coffee?”

She pantomimed setting a menu in front of him. “We have any-time breakfast plus daily specials.”

Sam ran his finger down the imaginary menu. “What would you recommend?”

“Can’t go wrong with the meatloaf. Comes with two sides and hot rolls.”

“I’ll take the meatloaf along with mashed potatoes and green beans.”

“Coming right up.” Paige turned in a circle, then mimicked setting a plate in front of him. “Don’t forget to save room for pie. Apple, cherry, or blackberry.”

“Doggone it, Paige. You’ve set my appetite on fire. Any chance of adding that to your menu downtown?”

She stopped still. “Huh, maybe I will.” She zipped around the counter, waving one hand overhead for him to follow. “We should get going.”

“As much as I’d love to join the get-together at Dana’s, I have a couple hours of paperwork ahead of me. My fault. I should have just switched vehicles and not gone inside the office to check my desk.” He pushed off the stool. “How about I take you and Jess out tomorrow night for dinner?”

She knew the reason why. He could see it in her eyes, could read it in the tilt of her head. She just wanted to hear him say the words. He’d give her the satisfaction, but he was going to take his sweet time about it.

“The kid needs to eat, and it’ll be a distraction from all the drama. Plus, I’d like to hear how many fireworks are set off when you and Nick have your meeting tomorrow.” A half-step forward put him just short of touching her. “But most importantly, I want to get to know you. We’ve had probably a dozen dinners at the Cantina with Rhys and Jamie. Danced several times when I could get you out on the floor. I want to spend time with you, Paige. More than stopping in for coffee before work.”

“Hmm. I have been wondering about that.” A small pout grazed her lower lip.

Subtle but seductive. No wonder Paige Carson had captured his attention like no other woman. He stroked his thumb across those full lips, wondering how long it would be before he could taste them.

She slipped away and pushed the door open. The room brightened with the influx of sunlight. His heart grew a little brighter as well from the saucy grin on her sweet face.

Sam grinned as she sashayed out the door. For once, the two of them were on the same channel, and things could only get better.

Excerpted from South Pointe by Dianna Wilkes. Copyright © 2019. All rights reserved. No part of this excerpt may be reprinted or reproduced without permission in writing from the author. 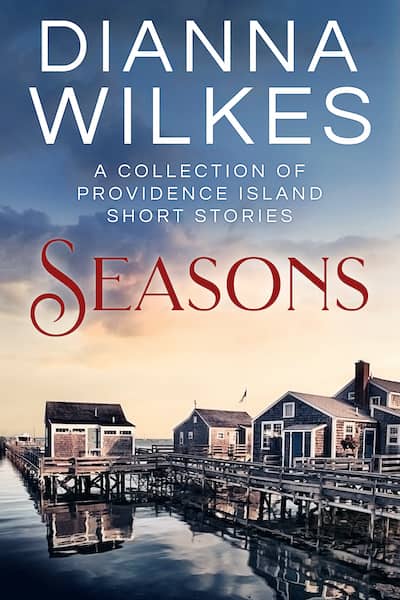